1067 PacificPeople is a five-year social-ecological movement-based art project by artist and choreographer Andrea Haenggi in collaboration with writer Robert Neuwirth. In 2013 Haenggi and writer Robert Neuwirth signed a 5-year lease for 1067 Pacific Street, a former auto-repair garage with a 1900 Sq Ft vacant lot in Crown Heights, Brooklyn. The socially and ecologically engaged research and performance artwork, with its many public encounters, turned from a rented garage and lot into an urban weeds ecosystem and as well into the co-founding of the artist collective Environmental Performance Agency (EPA) in March 2017.

We are a group of people coming from Live-Performance, Dance, Investigating Journalism, Choreography, Philosophy, Somatics, Ecology, Art, Activism and the Art of the Practical. We are not an institution in the making, not a fundraising machine. We are a chimerical commons, a garage mirage for everyone seeking a break from the grind of money chasing money. We are a dream chasing a fantasy of true mutuality and inspiration. Our values are: the value of love, the value of friendship, the value of taking risk, the value of freedom of expression, the value of rawness, and we go beyond humans and believe the non-humans, such as urban wild plants, the weeds may can help us to find new forms of being together.

Brief History
In 2012 when Andrea Haenggi lost her 19 years live-work artist studio in Williamsburg because of real estate, she knew her next journey in New York was to figure out how to create a critical movement-based work to address the failure of the system and loss of our bodies, minds and souls. What do we value? Writer and journalist Robert Neuwirth supported her vision and together they signed a 5-year lease for the 2500 square foot garage/lot 1067 Pacific Street in Crown Heights. The 5-year journey began in January 2013. In 2014 choreographer Carrie Ahern became a very important part of the project through her artistically involvement and through her support of financial advice. In March 2017 the plant, Artemisia vulgaris (Mugwort) told Andrea Haenggi to become a collective to allow for grow. In June 2017, 1067 PacificPeople grow officially into the co-founding of the Environmental Performance Agency (EPA), an artist collective. The lease responsibility stayed with Andrea Haenggi and Robert Neuwirth until the end of the lease. The surrender of the key will be in January 22nd, 2018. 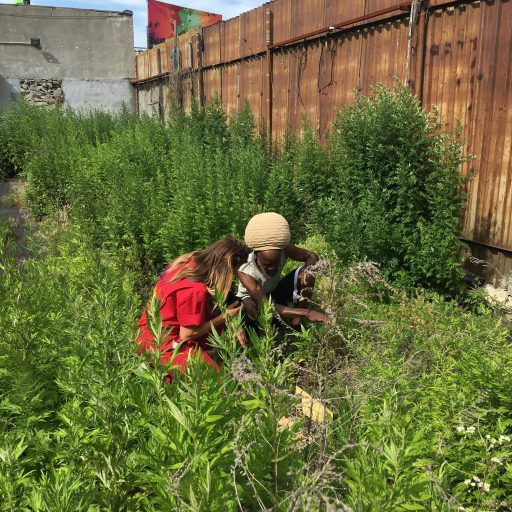 Neighbor Max shares his knowledge about soil to artist Andrea

Mission
One of the main question over this 5 -year mission was to come closer to the question How a Weedy Society may could look like? It took its inspiration from the living and being of wild urban plants we are often call Weeds (Weed: “A herbaceous plant not valued for use or beauty, growing wild and rank). How about we are taking “wild weedy plant thinking” as an in road to create new types of societies. How about we really challenge deeply entrenched power through collective existence, not through the idea of retreats that is rooted in individualism but rooted in entanglement with individualism. Over time the place became a safe haven for humans and non-humans to allow for re-wilding and spontaneous urban being.